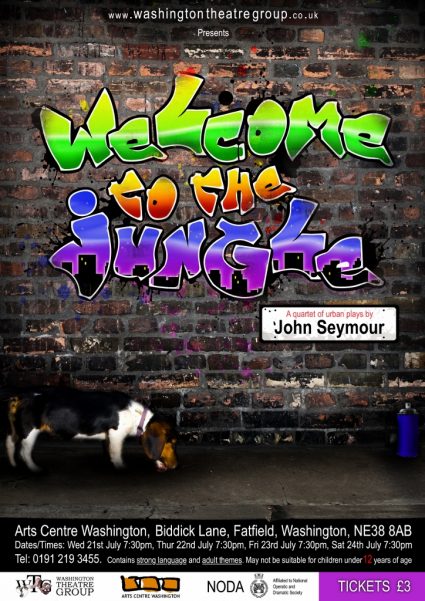 Written by John Seymour Washington Theatre Group’s production in summer 2010 is to be a departure from the norm.  Instead of a single full-length play, the group is staging a quartet of one-act plays by local writer and group member John Seymour, under the umbrella title of Welcome to the Jungle. The umbrella title reflects the fact that all four of the plays are set in a modern city environment – an urban jungle – and that all of them relate to some aspect of modern life.  Each play is different in style, tone and content, and this helps to provide a very varied experience both for the group and its members, and for the audience.  This makes the whole show at times dark, silly, serious, satirical and moving, through incorporation of drama, comedy and musical performance. These plays have been written over a period of several years for several different purposes, but they come together well in making this complete show.  The aim in putting together such a varied performance is to maximise the chances for group members to be involved in the show, and to showcase the array of talent within the group. Stuff Eddie and Snowflake are free.  Each has rejected the trappings of modern society in favour of a life of homelessness.  But when a stranger finds their sanctuary, they discover that the trappings they have rejected aren't so easy to escape from... Glued How could life be any more fulfilling for Barry and Tiffany?  After all, he has his documentaries and she has soaps, and they both have their TV-fuelled imaginations, but what exactly are their imaginations trying to tell them? Past Imperfect Elderly care home resident Alice is alone.  Only the occasional visits of her busy daughter Sandra give her something to look forward to.  Until new care worker Mags takes an unexpected interest in her, that is.  But what is Mags' real intention? Dogsbodies Melody prides herself on her professionally-run dog training classes.  But then new student Ann comes on the scene with her dog Scruff, a mutt of dubious parentage.  How will Melody's regular pupils react to Ann's arrival?  And how will their dogs react to Scruff?